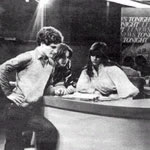 BAYVILLE — As he stood in the middle of the crowded room, Efim Brook could only marvel at how many professional television journalists were gathered to celebrate the 20th anniversary of LI News Tonight, the cable news show produced at New York Institute of Technology. “It was nice to see that we put a seed in the soil and something nice and helpful grew out of it,” says the former college professor and television producer, who helped found the program.

The assembled multitudes were all former members of LI News Tonight, the longest-running nightly cable news program on Long Island. In its 20 years on the air, the show has won numerous broadcast journalism awards, including an Emmy, and many of its graduates have gone on to prominent positions in the field. However, what may be most remarkable about this news show is that its reporters are all college students.

It began in 1983 in the NYIT communications department, then under the leadership Dr. Adrienne O’Brien. Embracing a new teaching approach of “learning by doing,” O’Brien and Professor Brook created LI News Tonight (LINT), designed to put students alongside working professionals in actual television news production. “Most students aren’t linked psychologically and emotionally to a lecture,” O’Brien says.

The show made its official broadcast debut on July 18, 1983 on Cox cable system, which reached only 8,000 viewers. Mark Grossman, the founding production manager, remembers how new it all seemed: “We were pioneers. We knew we were putting together something that hadn’t been done before.”

In fact, the concept of cable news itself was somewhat new to Long Island. At the time, Long Island sported seven separate cable companies, none of which did a news show. “News12 did not exist yet, and [channel] 21 had stopped doing a daily news show, so there was a period of time when LI News was the only cable TV news broadcast on Long Island,” Grossman says. “We knew we played a critical role on Long Island because there was a real void for a time period.” A study conducted by NYIT at the time revealed that the big networks did not cover Long Island much.

In 1984, Drew Scott, a former Washington, D.C. news correspondent for Independent Network News on Channel 11, was brought in to replace founding anchor John Miller, who had moved on to CBS radio. Scott teamed LINT with WLIW to offer live local election-night coverage—another first in Long Island cable TV history. “We assigned all of our LI News reporters and camera people,” Scott recalls. “We won many awards for the coverage and everybody had a great learning experience.”

Such real-world lessons were meaningful to students like Mike DelGiudice, who was a student in LI News’ first semester and is now a multiple Emmy Award-winning cameraman for News 12 Long Island. “When then-Vice President George Bush came to Long Island to unveil the X-29 airplane, we got to cover it,” he recalls. “It was a big deal, and there was LI News Tonight.”

By this time, LI News Tonight was seen on seven different cable stations. Eventually, Charles Dolan bought these stations and created Cablevision. O’Brien met with Telecare to talk about carrying LINT. “Cablevision had no local news at the time, we were the only game in town,” says O’Brien. The result was that Monsignor Thomas Hartman put LI News Tonight in its current 15-minute slot, extending potential distribution into more than a million homes at the time. “It has done my heart a great deal of good to realize that some of those students have gone on to be very notable people, and I’m proud to be a small part of that,” Hartman says.

In 1986, Charles Dolan started News 12 Long Island, which some feared would end the student broadcast. O’Brien met with Dolan to gain assurances that he would continue carrying the program. “Dolan said that LI News was a great program and promised it would stay on, crediting it with supplying a large part of the News 12 staff,” says O’Brien.

He’s right about that. News 12 anchor Lea Tyrrell got started at LINT, as did Trish Bergin. “The program’s greatest strength is the fact that it works like a real newsroom, with daily assignments and nightly deadlines,” Tyrrell says. “Also, student crews work in the top market right alongside the professional news crews covering the same stories. They can see how the pros do it compared to the story they put together.” Bergin remembers those lessons. “One of my first reporting assignments was covering the Joey Buttafuoco story. I was standing next to some of the biggest names in journalism, and boy was I scared,” she says. “But in addition to learning how to cover a court case, I was able to watch these other reporters in action.”

For better or worse, the local Long Island beat has given student reporters the opportunity to work on major stories of national interest. On December 5, 1990, when Avianca Flight 52 crashed in Cove Neck, LINT students shot coverage of the crash wreckage which was shared with many city networks who credited the show. In December 1993, Joe Marcus and Rick Smosky covered the breaking story of the Colin Ferguson Long Island Rail Road train shooting. “I was listening to my police scanner when I heard about this shooting… so I grabbed my gear and raced down there,” says Marcus, who is now a camerman for TV 55. “What a circus, every station was there from around the world.” He and Smosky shot footage late into the night.

The next day, LINT added two more reporters, Melissa Rehberger and Trish Bergin, to the story. “LI News Tonight gave me real- world experience in television journalism,” says Bergin, who now anchors Inside Edition. “I knew when I got my first television job exactly what I needed to do to get the story done.” Reporters also covered the Katie Beers incident, the TWA Flight 800 crash, LI wildfires and the aftermath of 9/11.

LI News Tonight veterans populate news stations across the country at all levels. Patti Ann Brown became an anchor at Fox News. Nancy Bessman Werteen, now a reporter/anchor at WFMZ-TV in Pennsylvania, had a major influence on another student, Mike Fitzsimmons. He’s now assistant news director of WNBC-TV. “The very first time I went out with a crew and a reporter, I watched as Nancy Bessman put together a story about a tragic accident involving a limousine carrying a bride and groom from their wedding celebration,” Fitzsimmons recalls. “I witnessed the process from beginning to end and I was hooked.”